What can we learn from the sea? Marcus Coates and Fiona MacDonald : Feral Practice together with a panel of marine specialists to discuss what the sea and its diverse inhabitants can teach us about the human world. The panelists  answered audience questions through their specialist knowledge of the sea and marine species, bringing new perspectives to our human concerns. 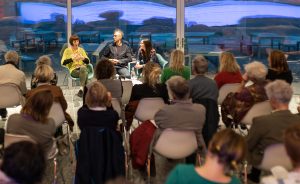 Dr Clare Embling, lecturer in Marine Ecology at the University of Plymouth, specialist in the ecology and conservation of marine vertebrates, habitat modelling, bioacoustics, and human impacts on marine species.

Poet Susan Richardson, who has been writer in residence for the Marine Conservation Zones, and whose latest collection is entitled Words the Turtle Taught Me.  Richardson is  founding editor of Zoomorphic. Susan had a family crisis and could not attend in person, but delivered some answers via the medium of the internet.

A walking event in Folkestone curated by Whitstable Biennale and The Ash Project. The event made imaginative connections between people and Ash trees,  interconnected species, and relation with the wider woodlands. We were delighted to be sitting and standing under/on/around a huge spreading ash tree in Folkestone’s Warren for much of this event. 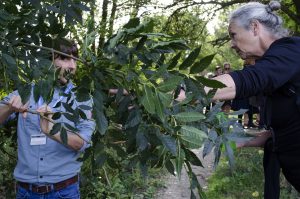 Tony Harwood is the Principle Resilience Officer for Kent County Council – a bit like an advisory special forces for Kent. Tony has been learning about ash trees and the impact of ash dieback on the ecologies of Kent since 2012 when the disease was first reported here.

If apes could offer advice on human problems, what would they say? Artists Marcus Coates and Fiona MacDonald : Feral Practice were joined by primate specialists to illuminate problems and questions of human experience. Ask the Apes draws on and celebrates the vast resource of knowledge that apes, and the humans that study them, have accumulated. Ask the Apes accompanied the exhibition ‘Animals and Us’ at Turner Contemporary, in which Marcus exhibited a work he made in collaboration with Volker Sommer. 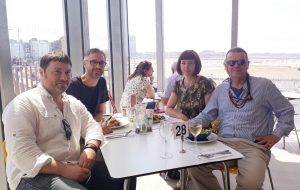 Volker Sommer is Professor of Evolutionary Anthropology in the University of London. His research interests focus on the evolution of primate social and sexual behaviour, cognition, rituals, biodiversity conservation, animal rights and evolutionary ethics. From 1989, he developed a long-term study of white-handed gibbons in Thailand. Here, he lived for several years at the edge of the Khao-Yai rainforest. In 1999, in Nigeria’s mountainous northeast, Volker Sommer founded the Gashaka Primate Project with a specific focus on monkeys and chimpanzees.

Dr Nicholas Newton-Fisher is a primate behavioural ecologist and expert in wild chimpanzee behaviour. He has conducted extended fieldwork in Uganda and Tanzania. He conducted the first detailed study of the Sonso community in the Budongo Forest, Uganda.  He was assistant director of the Budongo Forest Project (now BCFS) in Uganda.

Artists Marcus Coates and Fiona MacDonald : Feral Practice, with an esteemed panel of bird specialists: Helen Macdonald, Tim Birkhead and Ceri Levy, apply their knowledge of bird life to help illuminate problems and questions of human experience. The panel  used their specialist knowledge of the intricate relationships and behaviours that have evolved amongst bird species as a mirror to our own lives, opening up fresh perspectives and insights. Ask the Birds was the first of three events for Whitechapel Gallery’s Curios Society, accompanying the exhibition Mark Dion: Theatre of the Natural World. 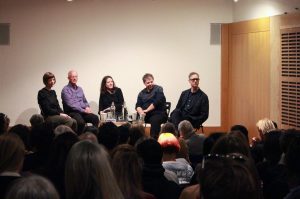 Helen Macdonald is a writer, naturalist, and scholar. Her best selling book, H is for Hawk, won the 2014 Samuel Johnson Prize and Costa Book Award. She has written and narrated radio programmes, and appeared in the BBC Four documentary series, Birds Britannia, in 2010. Her other books include Shaler’s Fish (2001) and Falcon (2006).

Tim Birkhead is Professor of Behaviour and Evolution at the University of Sheffield. He researches bird populations and breeding. Recent publications include: The Most Perfect Thing: the Inside (and Outside) of a Bird’s Egg, 2016; Bird Sense: What it Is Like to Be a Bird, 2012; The Wisdom of Birds: An Illustrated History of Ornithology, 2008.

Ceri Levy is a filmmaker, writer, curator, and podcast presenter. His Gonzovation Trilogy, with artist Ralph Steadman deals with the subject of species extinction. He is a campaigning film-maker for conservation. The illegal hunting of migratory species in the Mediterranean forms the basis of his project, The Bird Effect. His journals can be read online at Caught by the River.

British artists Marcus Coates and Feral Practice, together with an esteemed panel of naturalists – forest scientist Gabriel Hemery, botanist Irene Palmer, urban ecologist Mathew Frith and plant folklorist Roy Vickery – invited the audience to bring deep-rooted personal questions and thorny problems to be deliberated and fathomed via the wisdom of the woods. 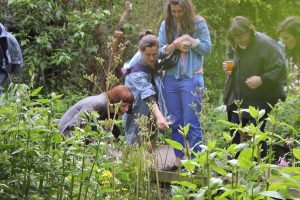 For more details go to feralpractice.com/askthewood